Battling vaccine misinformation: MMR vaccine has no association with Autism

There’s scientific evidence to prove that the MMR vaccine doesn’t cause Autism and there is no association between the two.

A Youtube video criticising MMR vaccination and linking it to Autism has resurfaced on the internet which was uploaded 2 years ago. The video claims that Measles, Mumps, and Rubella vaccine when given together harms genetic structure and weaken a child’s brain ultimately leading to Autism in kids. This video has been viewed hundreds of times but the claim is false and misleading people. 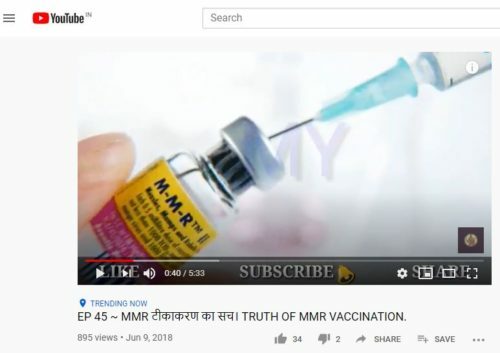 The claim dates back to 1998 when a researcher claimed a link between MMR and a high incidence of Autism but subsequently retracted by the journal.

WHO based on the recommendation of its advisory body the Global Advisory Committee on Vaccine Safety (GACVS), commissioned a literature review by an independent researcher of the risk of autism associated with the MMR vaccine.

· The existing studies did not show evidence of an association between the risk of autism or autistic disorders and the MMR vaccine.

· Based on the extensive review presented, GACVS concluded that no evidence existed of a causal association between MMR vaccine and autism or autistic disorders.

· GACVS also concluded that there was no evidence to support the routine use of monovalent vaccines against measles, mumps, and rubella vaccines over the combined vaccine, a strategy that would put children at increased risk of incomplete immunization.

GACVS further recommends that there should be no change in current vaccination practices with MMR. In fact, decreasing acceptance of MMR vaccination has led to outbreaks or resurgence of measles. Also, autism is a neurodevelopmental condition that has a strong genetic component with genesis before one year of age. MMR vaccine is typically administered after the child turns one.

We verified this claim with our fact-check team member Dr. Akshay Jadhav who is a Consultant Pediatrician at Cloud Nine Hospital, Bengaluru. He said, “it has been checked and verified that the possibilities of having autism in a child receiving MMR vaccine, is indeed negligible and probably as similar as any other child who hasn’t received MMR vaccine”.

“This establishes the fact beyond doubt that the idea of this related to Autism has been repeatedly targeted as a soft spot for parents to prevent them from vaccinating their children with MMR,” he added.