Published on Mon 19 Apr 2021 at 05:39
Share Story on
As the world grapples with a health crisis and misinformation, false claims are re-emerging despite being debunked earlier.
By First Check Team

A claim saying “Japanese Nobel laureate Tasuku Honjo allegedly said the new coronavirus is not natural and that China manufactured it” was widely shared on social media last year. According to a Reuters report, it was shared in more than 400 Facebook groups and pages to be exact and was debunked. 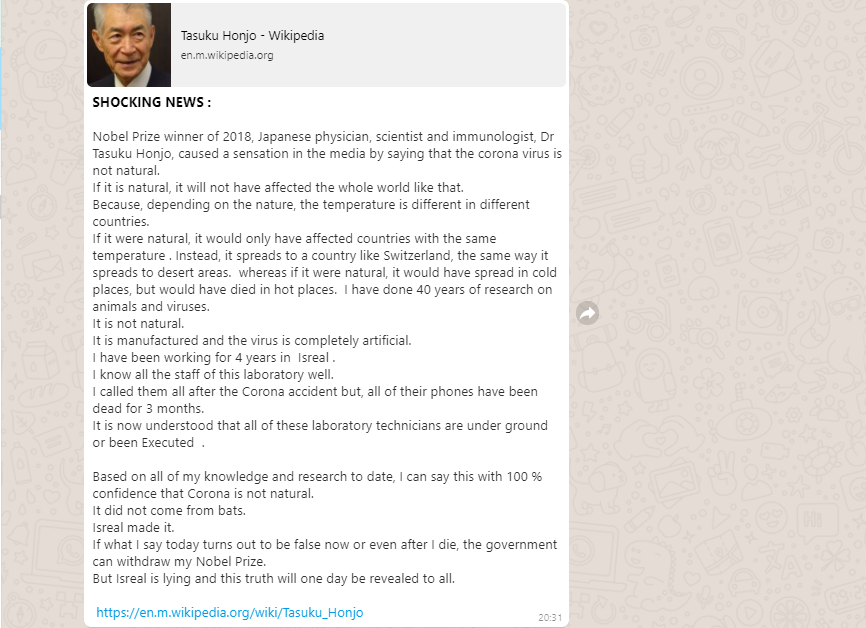 Despite a crackdown on such claims, this year, a WhatsApp message being shared in India claims that “Japanese Nobel laureate allegedly said that the virus has been manufactured by Israel”. It also has a link to the Wikipedia page of Prof. Honjo at Japan’s Kyoto University.

Earlier in 2020, Professor Tasuko Honjo refuted the claim in a written statement as “false accusations and misinformation”. His statement was published by Kyoto University on April 27, 2020.

Prof. Honjo said, “in the wake of the pain, economic loss, and unprecedented global suffering caused by the COVID-19 pandemic, I am greatly saddened that my name and that of Kyoto University have been used to spread false accusations and misinformation.”

The text also misleadingly says Honjo “worked in a lab in Israel”. We checked his professional record and found that he has only worked in Japan and the United States. Professor Honjo has been working at Kyoto University since 1984. He is currently the Deputy Director-General at the Institute for Advanced Study since 1984.

There is no evidence anywhere that might suggest that  Japanese Nobel laureate Professor Tasuku Honjo has ever said that the coronavirus was manufactured.