A video that has been watched hundreds of times on youtube claims that the video highlights how Russia is secretly burying dead bodies. However, the video is from Ballari, a district in the south Indian state of Karnataka which shows the undignified burial of dead bodies.

A YouTube video is being shared with a claim ‘secret burial of dead bodies in Russia’. It is captioned that health workers are dumping dead bodies into a large pit in Russia.  The claim is false. The video is from Karanataka’s Ballari district.

The video was uploaded on YouTube on July 13, 2020, titled “Secret burial of dead bodies in Russia”. The description of the same video reads “Every day, coronavirus kills people. In the quarantine zone, people are panicked. The Chinese government does not control the spread of coronavirus. The world is on the verge of a global pandemic. I hope we all do not die”. The video depicts health workers in hazmat suits dumping dead bodies into the large pit. An archived version of the video can be accessed here.

Based on our fact check, we found the claim false and misleading. We did a relevant keyword search and used video search tools to find the origin of this video. Search results led us to several news reports leading to the incident An article published by one of the leading Indian news media organisation, NDTV on July 01, 2020, states that the episode is from Karnataka’s Ballari district where the dead bodies of coronavirus victims are being dumped into a large pit. 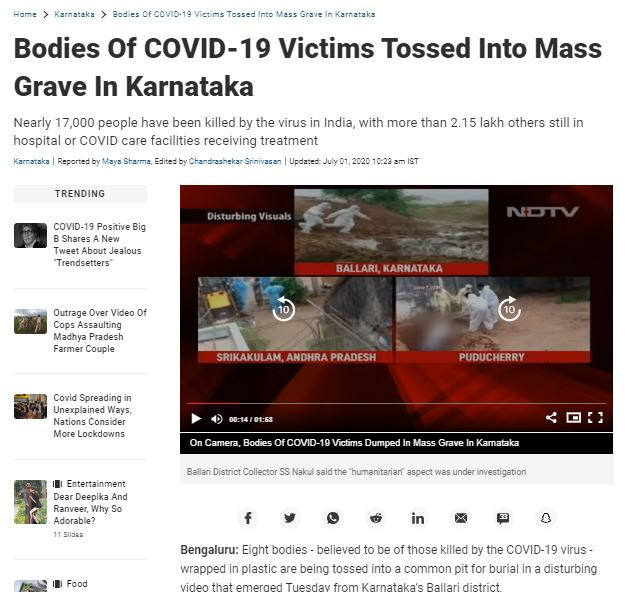 Further to our research, we also found that the office of Dy. Commissioner of Ballari has confirmed the incident. The official issued an apology for the man-handling and disrespectful treatment of the bodies of Covid-19 patients. 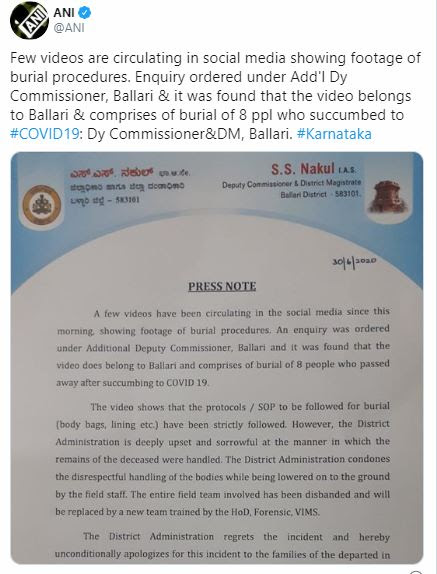 Therefore, we have found that the video uploaded on YouTube claiming ‘secret burial of dead bodies in Russia’ proved out to be an old video from Karnataka’s Ballari district and not Russia.